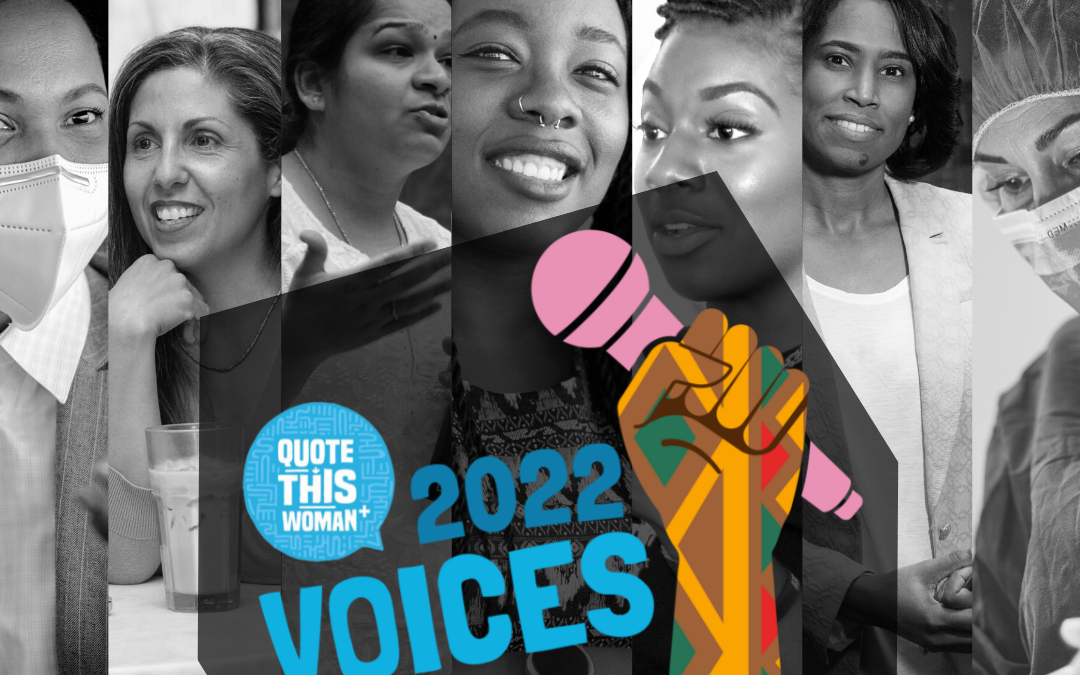 Call for Nominations: The QW+ Voices of the Year Awards

Quote This Woman+ (QW+) has launched the QW+ Voices of the Year Awards to mark three years of working to ensure that the people who are most overlooked are given a chance to be seen and heard in news media. Set to become an annual event, the awards recognise women+, both up-and-coming and established, who have made their mark on the South African media landscape in the last 12 months. Women+ is a term coined by QW+ and it encapsulates not only women but also those who nevertheless experience marginalisation through factors like race, sexuality, gender non-conformity, rural location, or living with disability.

Quote This Woman+ is a non-profit that specialises in amplifying the voices of women+ in the media. It curates a database of experts from the margins that journalists, media houses, podcasters, documentary makers and the like can access when looking for someone to interview or quote on the news of the day. With over 600 database members and more than 1000 global recipients of their fortnightly expert update, the young organisation has helped make headlines from Tshwane to Taiwan.

Before Covid-19 widened the gap, four out of five experts quoted as media sources were men. “With the world’s attention focussed solely on the pandemic, a lot of the traction we gained in the name of gender equality was lost” says QW+ founder and human rights activist Kathleen Magrobi. She sees the post-pandemic world as a crucial opportunity to claw back some balance in media representation, something sorely needed when the lived experiences of over half the population are currently sidelined in favour of a more narrow point of view.

QW+’s 2022 vision is to increase the number of women+ experts on their database who have come by their expertise as a result of real life experience. Although the database boasts professors and public media personalities, the organisation recognises the value of life-informed knowledge. For example, a rural community leader participating in land activism, a hearing-impaired doula or a wastepicker entrepreneur. With the QW+ Voices of the Year Awards, significant rising voices get as much as a chance as famous media personalities. QW+ encourages women+ who have not yet joined the ranks of QW+’s experts, or whose media experience is still growing, to enter. Through these awards, QW+ reminds the media, and media audiences, that it is the people who are the most overlooked are the most important to listen to; and encourages more women+ to sign up as news sources on the QW+ database.

Ten of the nominees will be awarded the soon-to-be coveted titles of QW+ Voices of the Year in the categories of:

A short bio on the judges is attached at the end of this blog.

QW+ says they will be judging the awards based on nominees’ news value; effort in promoting their voices in their area of specialisation, improving their media skills, highlighting contextual factors in their field; commitment to being available to journalists; proactive response to current news events (pitching their own stories); courage to challenge the status quo, visibility and engagement across media platforms. The winners of the awards will not just be based on media features and accolades, but the courage nominees have displayed to get into the media despite the challenges of being seen and heard.

“[QW+] will be celebrating the incredible and hard-won achievements women+ experts have made in the last year. We hope many women+ will nominate themselves, something we typically only see from men,” commented QW+ Business Developer Agape Johnson. To nominate someone for the awards, go to shorturl.at/bosZ7 before 27 August 2022. To be eligible for the award, nominees must be members of the QW+ database, which results in all submissions automatically going through the organisation’s vetting process and, if eligible, being added to their database and network.

The QW+ Voices of the Year Awards Judges Bios

Kathleen Magrobi is the Founder and Director of Quote This Woman+. Kath is motivated by the superhero work of African women holding together communities through schools, clinics, churches, mosques, research units, and civic spaces. She believes that every time a woman+ speaks up on a matter of importance, they join a movement of women who have reclaimed another inch of space in a world that deserves to belong equally to all.

Lenine Rassool is the producer and presenter of The Womxn Show, a weekly television show that covers issues around gender based violence and child protection. She has 15+ years experience as a journalist, with a focus on human rights and social justice. She has worked for Femina, Cosmopolitan and Independent Newspapers as well as producing content across print and web platforms in the non-profit sector. She has been with Cape Town TV since 2017.

Pontsho Pilane is an award-winning journalist, writer and media trainer turned communications professional in the areas of health, gender and social justice. She is also a PhD Fellow under the South African Research Chair in Science Communication at Stellenbosch University.

Glenda Daniels is a writer, editor, researcher, lecturer, author, feminist and media freedom activist, who is currently an associate professor of Media Studies at Wits University. Glenda is SANEF’s Ethics and Diversity sub committee chairperson. Her experience includes Journalism for over 20 years in print media companies where she writes features, hard news, commentary, analysis and profiles.